Which type of advertising is the best for our planet?

Published by Sabrina Levin on November 17, 2020 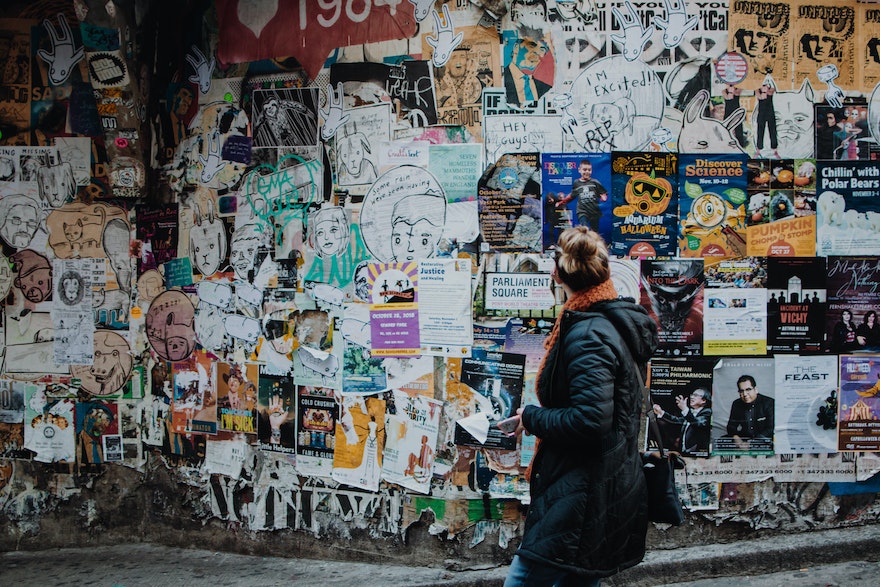 Once upon a time, in a world that looks nothing like our planet today, the Egyptians were using papyrus, which is most similar to thick paper, to make posters and pass around sales messages. In other words, they were advertising before it was even a thing.

Fast forward several thousands of years to the 16th-century and advertising appeared within the creation of newspapers and magazines, and printers which could print fast enough to release new content every day.

Then we are swiftly moving onto the 20th-century, with the invention of cable television, direct mail and the internet.

And yet after all of this, people are still finding miraculous ways to bring advertising to new heights, from blockchain technology, to social media, right down to product placement on your favourite Netflix series. And whilst these ways are becoming more and more efficient, refined and successful, we perhaps haven’t considered all factors here.

That is the effect it has on our planet.

So, we took the opportunity to do some research, use our own experience in the advertising industry and work out what is currently the best type of advertising for our planet, and how we can improve the worst ones.

Starting at the top, and maybe quite surprisingly, print advertising is one of the more environmentally friendly options for our planet. When compared to email advertising in a study carried out by LCA, print advertising is more favorable for 15/16 environmental indicators. For example, a colored brochure is 2.2 times less impactful on climate change, has 20 times less effect on the eutrophication of freshwater and has 5 times less effect on ocean acidification. By printing on recycled paper, using vegetable inks and using printers which run on carbon-neutral energy, this type of advertising can easily be made carbon-neutral. The only thing left is the delivery of it, which if carried out by an electric vehicle, completes our conclusion that print advertising can be very environmentally friendly.

Of course, printing on un-recycled paper, with inks made from non-renewable oils, and delivered via a diesel-engine car, this makes print advertising to be much worse for the planet. However, these adaptations of print advertising are not only easy to adapt for this type of advertising but are also becoming more common and even more cost-effective as vegetable inks and carbon-neutral printers can reduce the cost of the advertising massively.

Next, we looked at DOOH, digital out of home advertising, which is more frequently known as electronic billboards. The kind we see in Times Square, or even at your local bus station. There is the option to use environmentally friendly DOOH, which makes no difference to the advert but which runs on solar energy. These digital billboards have the ability to be made carbon neutral and compared to OOH, are much lower maintenance and have lower costs as a result in the long run, if they are run by solar power, Although this is rarely the case and the majority of billboards installed are not solar powered, it is possible.

We aren’t forgetting the fact that there will be (potentially, depending on the size of the billboard) large servers which will be running most of the time to keep the adverts active. These servers will of course be using data and this in turn leads to the release of Co2 into the atmosphere.

Again, these servers could be powered by carbon-neutral energy but that is much more difficult to do (not impossible!) compared to print advertising, which is why we ranked this second in our list. Also, whilst the lights inside the billboards may be LED, depending on the size, hundreds of these lights may be needed which leads to massive consumptions of energy. So, whilst most DOOH billboards are not carbon-neutral, these types of billboards do exist which is why this is high up on our list.

OOH, out of home advertising, is what came before DOOH and although it is used less frequently, it is still very much in use today. Regular billboards, which feature a paper advert stuck down, and which require very high maintenance as well as a loss of lots of extra paper. This is ranked below DOOH for several reasons, the main one being the problem of recycling. Whilst recycled paper may be used for the base of the advert, and may be recycled after its use, these adverts are almost always covered by a vinyl banner which protects the advert from rain, but which cannot be recycled. So, whilst these billboards cause over 3 million square meters of paper to be thrown away, or recycled every week, there is the exact same amount produced in vinyl waste which cannot be recycled. This vinyl damages ocean ecosystems and marine wildlife, polluting our atmosphere and causing irreversible damages. Furthermore, one of the biggest challenges facing this type of advertising is the delivery of supplies to the locations and the huge carbon footprint that is released from the trucks which are needed to deliver these large billboard adverts.

There are problems that OOH advertising must overcome, and which are causing huge problems for our planet as we speak. OOH advertising can be refined to make it much more planet-friendly, and as our oceans are being polluted with excessive amounts of vinyl waste, this is something that must be worked on.

Now we find ourselves looking at the technology-side of advertising, which is not surprisingly at the bottom of our list.

To begin with, mobile and email advertising are, what I like to call, the best of a bad situation. Whilst mobile phones use a lot of data, and there are servers constantly running all day especially for the likes of social media and emails, these servers are much smaller than those for television, laptops and blockchain. Each piece of advertising that you receive via your email, which may contain large photos, animations or videos, and they can release up to 50g of Co2. If you think about how many subscriptions you may have, and how many emails you receive daily that are for advertising purposes, this adds up pretty quickly.

Next, we will look at television advertising, which is pretty self-explanatory about why it is environmentally unfriendly. From the production of the advert, the editing, the release onto daytime television and the data servers that are running to process everything smoothly, that’s a lot of Co2. These carbon emissions are released into the atmosphere directly when shooting commercials and via the data servers when the advert is broadcasted on television. One easy way to cut back on these emissions is via the production of the advert. If you read my other article here, I explain more about how you can do that here.

For both these forms of advertising, it can seem hard to reduce the Co2 levels being released, and one of the biggest problems is the servers which are constantly running. As you will now see, this becomes an even bigger problem on much larger scales.

Product placement is one of the least obvious forms of advertising which would be harmful for the planet. But then again, we learn something new every day. This type of advertising is used mainly by streaming services such as Netflix, Amazon Prime and Disney+, however, it can appear on regular daytime television in some cases. This type of advertising involves a company sending their products to be used on set, and in turn, the viewers are tempted to buy their products after seeing their favourite actor use it. For example, in the final series of Suits, Microsoft Surface laptops were used by all the characters and the logo appeared in the frame very clearly every now and then.

How is this bad for the planet? For starters, we have the sending of products many miles away to get to the set location, most likely via plane. Beyond that, these streaming services use an incredible amount of explosive data which requires massive amounts of servers to keep it up and running. To put this in perspective, Netflix and Youtube represented over 50% of data of internet traffic at peak times in North America in 2013. Fast forward to 2020, when people are being forced to sit at home and not go out, streaming services have become more popular than ever with the average American paying for 4 different services at one time. This increase in demand is joint with an increase in data, an increase in demand from the services and so an increase of carbon emitted into the atmosphere.

Similarly, blockchain technology, which is rooted in bitcoin, but used for advertising as well, requires a huge amount of data servers to carry out its functions. To put it simply, blockchain is a data structure which stores information in several cryptographic linked blocks. These blocks are distributed simultaneously to all participants in a network, making it impossible to be tampered with and making the data hidden and safe. Blockchain technology is being used increasingly in advertising for connecting industry resources, and it can reduce costs for the advertiser.

Bitcoin itself has a yearly carbon footprint of 22-22.9 megatons, and whilst not all marketing technologies using bitcoin are as energy-intensive, there is still a large amount of data which is required which is why it is one of the worst forms of advertising for the planet.

However, whilst this is rated as the worst for the planet in terms of advertising, if used correctly it could benefit the planet and could help improve climate change in some aspects. For example, Microsoft recently announced that it would invest 1 billion dollars into becoming a carbon negative enterprise. However, whilst this announcement is great, how can they be sure they are reaching their goals? If they used blockchain technology by creating a smart contract, this would not allow room for errors and would create transparency in Microsoft as to whether or not it is sticking to this goal. Blockchain can therefore be used to boost transparency within one and several companies, and also prevent backsliding.

However whilst this is some positive aspect, it doesn’t draw from the fact of how much it is taking from the planet, and the damage that it is causing to the planet.

Therefore, perhaps we need to focus on looking at how data servers can become more environmentally friendly, as this will make blockchain technology, product placement, television and mobile advertising move up the list and become better for our planet.

This planet is all we’ve got. Taking care of it is for ourselves, our own future generations and the future of our human race.

We might as well look after our planet now, because after all, as Greta Thunberg has famously said

There’s No Planet B.