So, Conscious Media Buying is on the Rise..What’s Next? 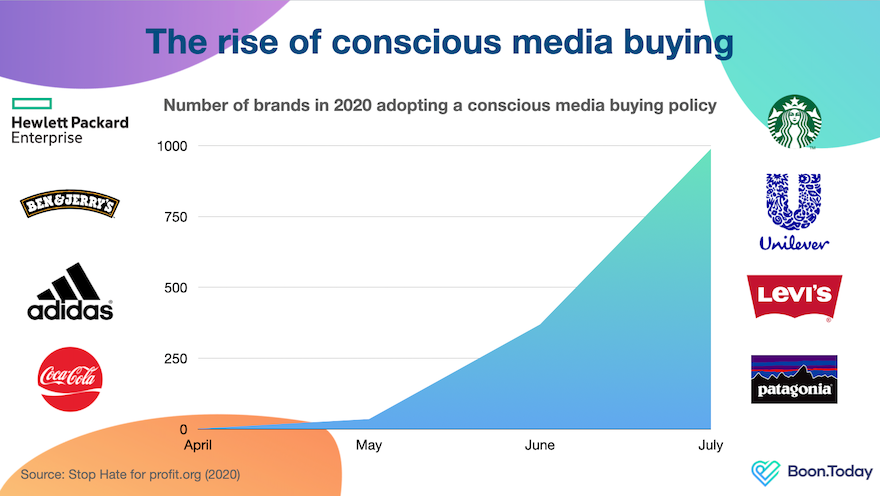 Your favourite coffee, snacks, ice cream, soft drink, sports shoes, outdoor clothing and jeans are all sticking together on this one thing…

...the Stop Hate for Profit campaign.

And now, as we, Boon.Today, are the driving force behind purpose-driven advertising, we have an important announcement to make to the world of advertising.

But first, let’s backtrack a bit to see how we got to this stage…

In May 2020, the Black Lives Matter movement was at its strongest worldwide due to the unjust killing of Mr George Floyd. Facebook therefore made a promise to donate millions of dollars to social justice causes.

That very same day, The New York Times reported that the most popular post on the Facebook platform, receiving nearly 100 million views, was an 18-minute video from right-wing activist Candace Owens, calling Mr Floyd a ‘horrible human being’, and called the idea of a ‘racially biased policy a fake narrative’.

Since then, many advertisers began to look at the media platforms they were advertising on, and realised that perhaps they should remove Facebook from the list temporarily.

This was called the Stop Hate for Profit campaign. This campaign came about because 99% of Facebook’s revenue is made through advertising and therefore removing the funding would put pressure on it to become a safer environment and to remove and prevent online posts which were promoting racism, hatred, sexism, bigotry or anti-semitism.

The word about this campaign spread and the number of brands which are boycotting Facebook ads grew and grew to way beyond 1000.

Patagonia was a leading brand in supporting this campaign, and it’s very own EMEA marketing director stated that Facebook’s actions at this time had been the tipping point for advertisers to rethink where they advertise and what’s worth spending their money on. 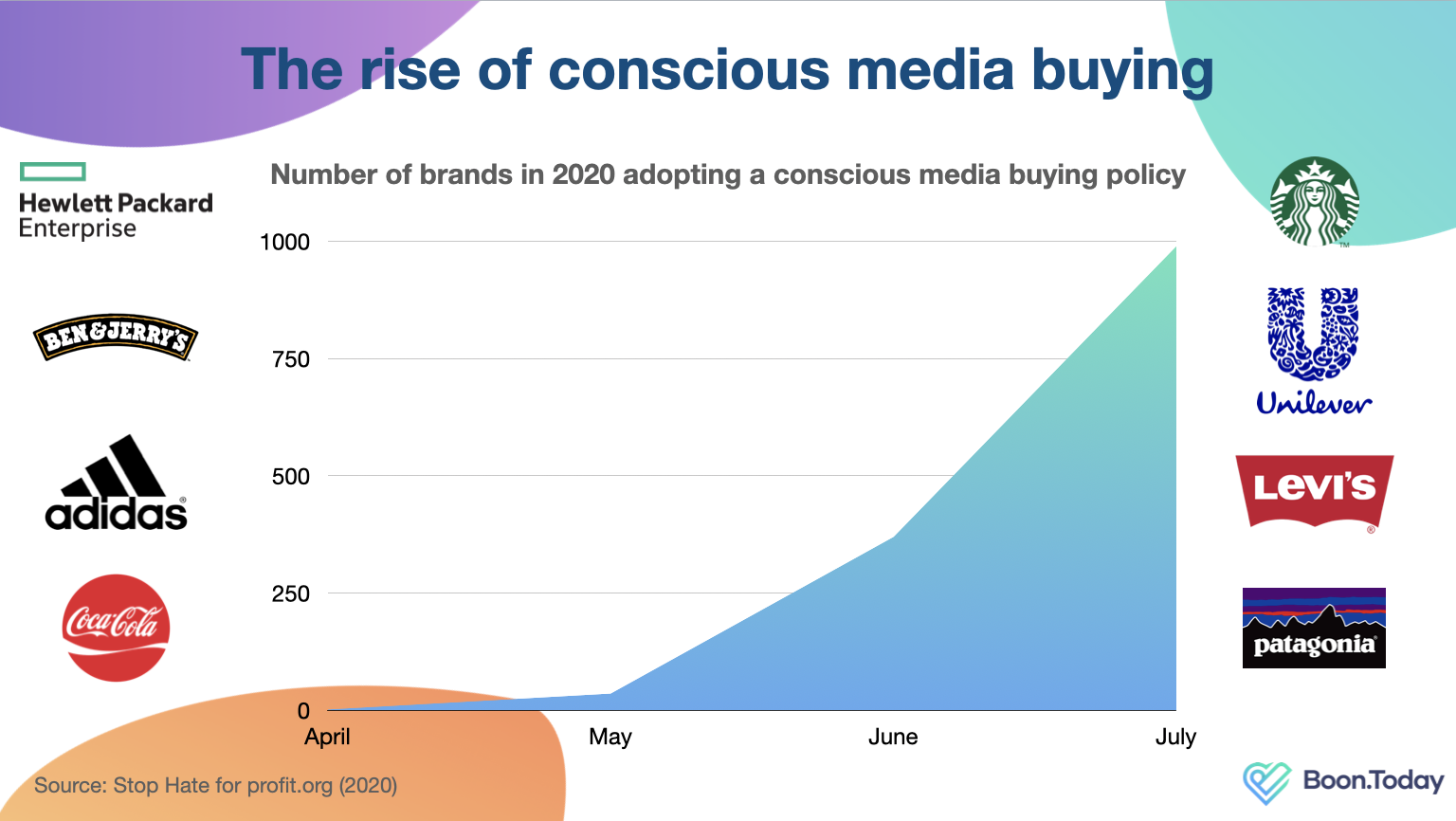 But now as advertisers are becoming conscious media buyers, the question is, what’s next?

What’s to come after this campaign ends?

Will brands just go back to advertising on Facebook as usual as it is a major platform to reach millions of people in seconds?

Or will brands stop advertising there all together, which could potentially harm their brand or the goals they are trying to achieve?

Patagonia uses social media regularly to reach communities and engage people on issues that matter the most to them as a company. If this stops, then the NGO’s they are supporting will suffer, their goals will not be met, and everything will backfire.

That’s ironic and very very unfortunate for them as a brand.

In response to all of this, whilst brands are considering their next steps, we have something to say:

The world of advertising is in a dangerous and threatening situation.

It’s now time to boycott the regular advertising mechanism and build your own responsible and conscious advertising strategy, which is unique to you as a brand or business.

That’s right. We said it. From standing on the side, we can see how this campaign has sparked people to become more media conscious, but not know anything about moving forward in the future, or how to keep up this awareness without boycotting unsafe media platforms.

As the world recovers from Covid-19, businesses are starting back up, but things won’t be as usual.

Advertisers and media agencies must now work extremely hard to introduce media conscious certifications, offers and commitments that haven’t been used before into their advertising.

They must now intertwine this with their regular advertising and ensure that it is embedded into their brands structure, so that this will carry on into the future.

The Vice President of Orange advertising in France has announced that they are introducing an eco-responsibility engagement as a criteria of brands towards their very own media partners.

They launched the ‘Green by Design’ project in September 2019 where they began to implement sustainable actions to decrease their carbon footprint.

However whilst doing this is amazing, and they are hopeful that having an eco-responsibility engagement will become common amongst brands, it costs a lot of time, money and enthusiasm from the whole team to implement this.

So how can a brand keep up its conscious media buying and ensure that media agencies are on the same page as them, at such a crucial time in advertising history?

We are fully aware of people going round in circles trying to figure out the cheapest, quickest and easiest way to sort all of this out.

To begin with, advertisers, media agencies and media owners must adopt the Ad For Good Label, which is a certification that ensures that all ads certified are respecting the Ad For Good charter. There is absolutely no room for movement on this and it ensures everyone is on the same page. It also ensures that ads using this label are giving at least 1% of their media budget to a fund a social or environmental initiative, but I’ll get to more on that later.

If Facebook adopted this label, it would therefore force all the advertisers it works with to become conscientious and responsible and it will make the platform a safe environment for advertisers to buy media from.

This would ensure that all their adverts are free from any potential harm towards the consumer, as well as sending a message to the advertising world. This label is the first of its kind and once it is adopted, it is the first step to ensuring their brand is implementing a strong strategy for being media conscious in the future.

Media agencies adopting this certification onto their clients would automatically ensure that their agency is media conscious and so too are their clients.

Media agencies have a ton of power at their fingertips and must be listening to their clients and taking action to ensure their adverts are free from anything potentially harmful to the world or society.

But this isn’t the only thing media agencies can adopt. Next, and finally on the list is for agencies to engage themselves with our purpose-driven technology, which is on the Boon.Today side of things, and is how we will ensure 1% of the campaign budget is put to good use.

By offering this technology to your clients, you are providing them with the opportunity to track every movement and interaction on each of their campaigns via our online platform.

This will also encourage your clients to engage with NGO’s, or support directly the causes that they

believe in as a brand, because 1% of the budget from their campaign must go directly to a cause of their choice.

Alongside this, the adverts can be made as interactive or as creative as they want, as we are able to implement QR codes, videos and app downloads onto any type of advertising that they want.

Conscious decisions must become the new norm, and brands and agencies must act together now in such a crucial time.

There is no time to think, this is the time to act. We are speaking to all the advertisers, media agencies, media owners, businesses and brands.

We are speaking to all the people that have become media conscious, and want to do something about it.

It’s time to realise your potential, and to act, because sooner or later, it will be too late.

The old ways of advertising will be written in the history books as a distant memory and as a lesson to the younger generation.

Speak to us about how we can work together and ensure that the conscientious media buyers don’t just stop there, but act to the maximum capacity in this advertising emergency.